It's more than just football (and yes, it's called football)

As I am looking forward to the World Cup final tomorrow, the world around me has no other thought (at least the world where I am right now). I am currently in Germany, in the Black Forest, where I was born. The excitement about the match against Argentina is without bounds and the unbelievable game against Brazil will not be forgotten in a long time - if ever. However, in my chosen home - New York City - and the United States of America, there are probably many more things that are of interest tomorrow. There was a burst of excitement going on and many people were talking about the 'rise of American soccer', but, as always when the team gets eliminated from the World Cup, the attention quickly shifts to other (American) sports or worldly events. 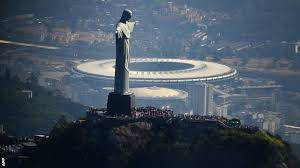 In my personal opinion, US football will never dominate the world - and that is the problem. Americans need to be the best and if they're not, they will consider it uninteresting, not important, less challenging. Focus is lost and if you don't focus, you can't become the world's best. In football nations like Brazil, Argentina, Italy, the Netherlands, Uruguay, Spain, Germany there are very elaborate programs to support and focus on the youths. In the US, if there is a good young athlete, they focus on the usual suspects... american football, basketball, baseball, hockey. And that's also where the money is. Besides, the US does not have the football IQ necessary to rise towards becoming a football nation. Attempts like bringing in Klinsmann or some old players from European clubs into MLS are not enough. You would need a structure underneath. In Germany, the DFB develops support programs, provides detailed seminars for youths coaches, has talent events and raises tomorrow's superstars through a program that starts at age 8 and stands by their sides until they finish school.

But that is quite alright. The US does not need this kind of football. They have their own.Tomorrow, however, it's our (the rest of the world) day and (besides some dutch coach) the entire football world will watch the culmination of a world event that takes place only every four years and never produces surprises (another reason this will never become a US major event). It's always the same old suspects n the semi finals. Brazil, the Netherlands, Argentina, Italy, Germany, Spain, maybe Uruguay, also England or Hungary a long time ago.

Was the game Brazil - Germany a surprise? Definitely when considering the score. But if you look underneath you can clearly see that Brazil did not have a plan and Germany did. Emotions alone is what was driving Brazil and Germany executed on a step by step program. Just review the first goal: It was a set piece situation... a perfectly executed corner kick. Thomas Mueller, shadowed by David Luiz, was moving towards the back goalpost. When David Luiz was trying to follow, Miroslav Klose stood in the way and Mueller was open to score the 1:0.

What happened after that is history and we don't know all the tactics, little tricks and moves the players were executing so perfectly, but this time it worked and the Brazilians were taken by complete surprise and had nothing in the cards to avoid the unthinkable - emotions had taken over their preparation and that is why football is more than just football. It's not just the goals that are interesting in a football game. Even more it's all the little things that happen in between.

Football is culture, Italy will always beat Germany when it counts. The Spanish will either play like gods or disappoint like hell - nothing in between. Brazilians can not be successful without the child-like, beautiful, awe-inspiring samba football that they tried to replace with sober, tough and aggressive play that was adopted over the past few years. They will have to reinvent themselves and go back to what they are. The English? Well, that's another story... and the Netherlands will have to find a solution too. They played three Finals, always have an excellent team and never go all the way. Why? I do not have a clue and that's the beauty about this sport: it;s complicated and impossible to understand. Non-followers always try to figure it out during the World Cup for them it's easy: Whoever wins was the better team and if a game has a low score it wasn't good.

There is so much more to this sport and there must be a reason for it to be the most followed in the world. I tried to figure it out since I was watching my first world cup at the age of 9, playing the sport myself and still following it until I die. But I will never fully understand what exactly is going on when Germany dismantles Brazil within a few minutes. And that is beautiful, exciting and interesting to me (no, I don't mean the dismantling - I love Brazil).

Tomorrow is huge. My team is in the Final ! and they might be the favorite because of that semi final. But this is football and we don't know what those smart people that make this sport so exciting, memorable and beautiful have in the cards for us.