Have you ever wondered why planners tend to rather use a safety stock with MRP Type 'PD' to buffer variability, as opposed to a reorder procedure? Oftentimes PD is used across the board and no one wants to bother with another MRP type. However, with SAPs standard configuration the safety stock doesn't serve as a planning buffer and the additional inventory ends up being dead stock.

Consider the following scenario: a safety stock of 30 pieces is set and a production order asks for 10 pieces on April 15. A deterministic planned material (PD) would replenish the inventory up to 40 pieces just before April 15. If, for some reason, the production order would increase the required quantity to 15 pieces two or three weeks before its start date, the MRP run (which excludes safety stock in the net requirements calculation) would generate an additional order proposal for 5 pieces. In that case, the inventory on April 14 would be 45 pieces... even though 40 would be plenty (25 more than needed). Simply speaking: safety stock is taken out of the planning efforts and the entire safety stock remains unused (...becomes dead stock). 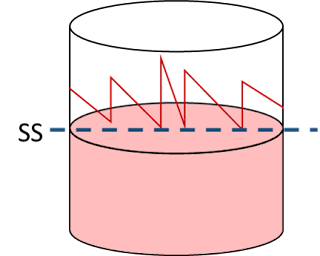 A far better solution, in my opinion, is the use of a reorder point method. If we're taking the same example, we'd set the reorder point to 30 pieces and thge MRP run would only replenish if the inventory level is lower than 30. During the replenishment lead time these 30 pieces serve as a true buffer and are consumed by regular consumption. Any safety stock that is set, is only used as a signal (exceptional message) when inventory gets really low. As you can see in below graphic, this method is a true buffering strategy. 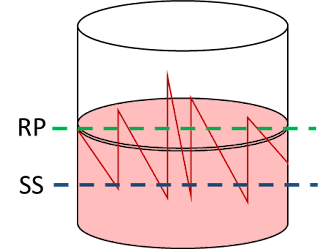 Switching your policy from a PD with safety stock to a reorder point procedure will instantly reduce your dead stock and bring average inventory holdings down. If you're concerned about stock-outs, increase the reorder point. That is much better than never dipping into safety stock.

(note: if you're adamant about using PD. you can customize SAP so that at least a portion of the safety stock is considered as a buffer for planning)