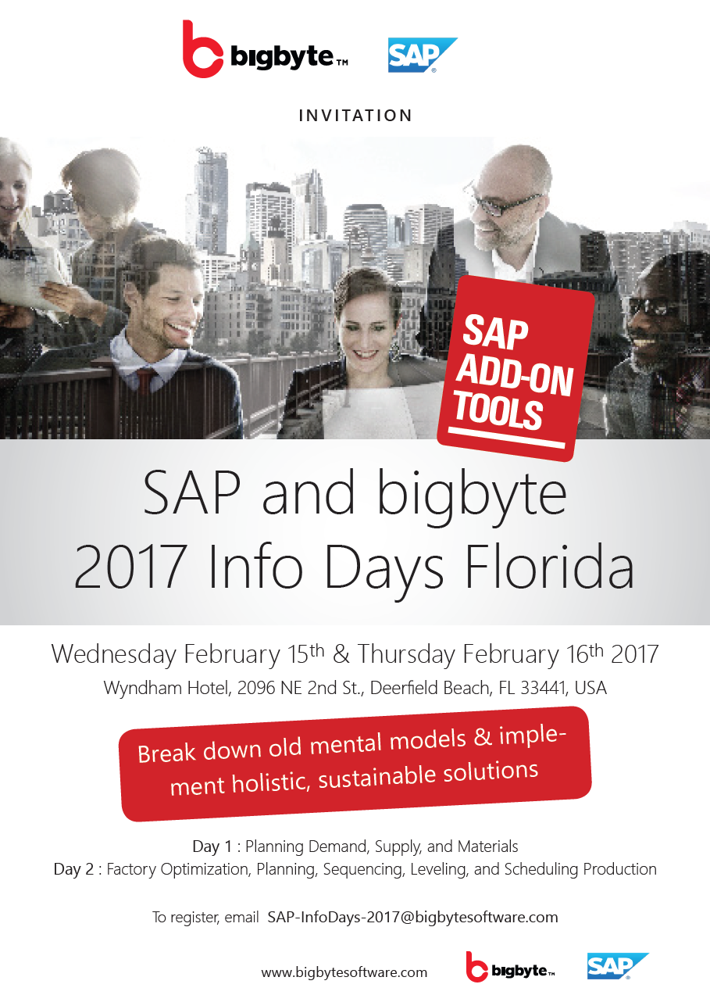 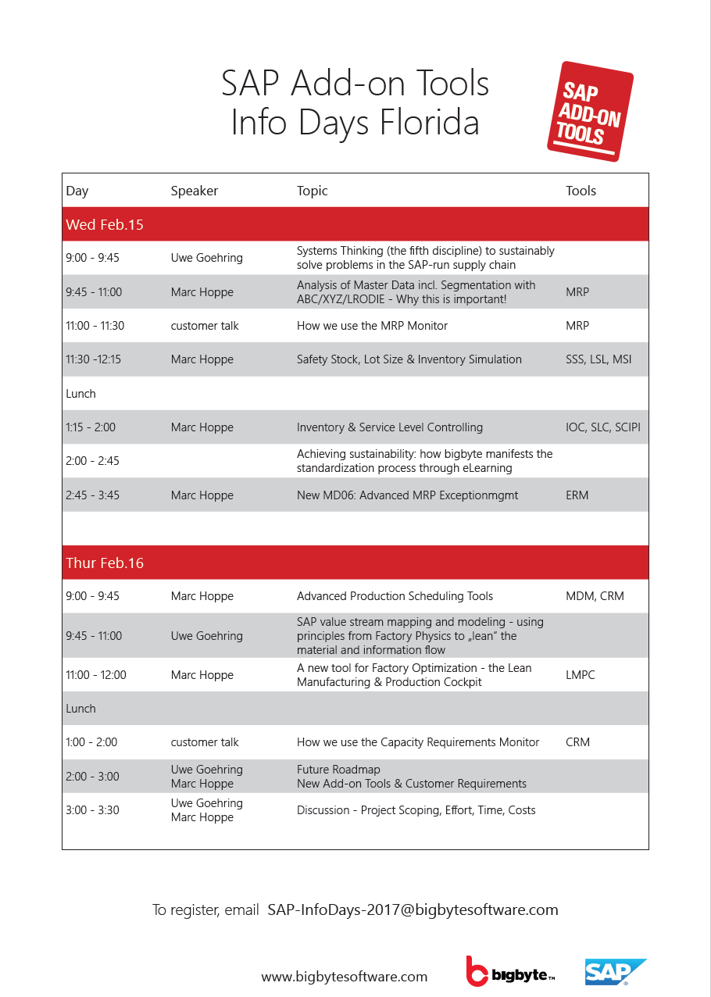 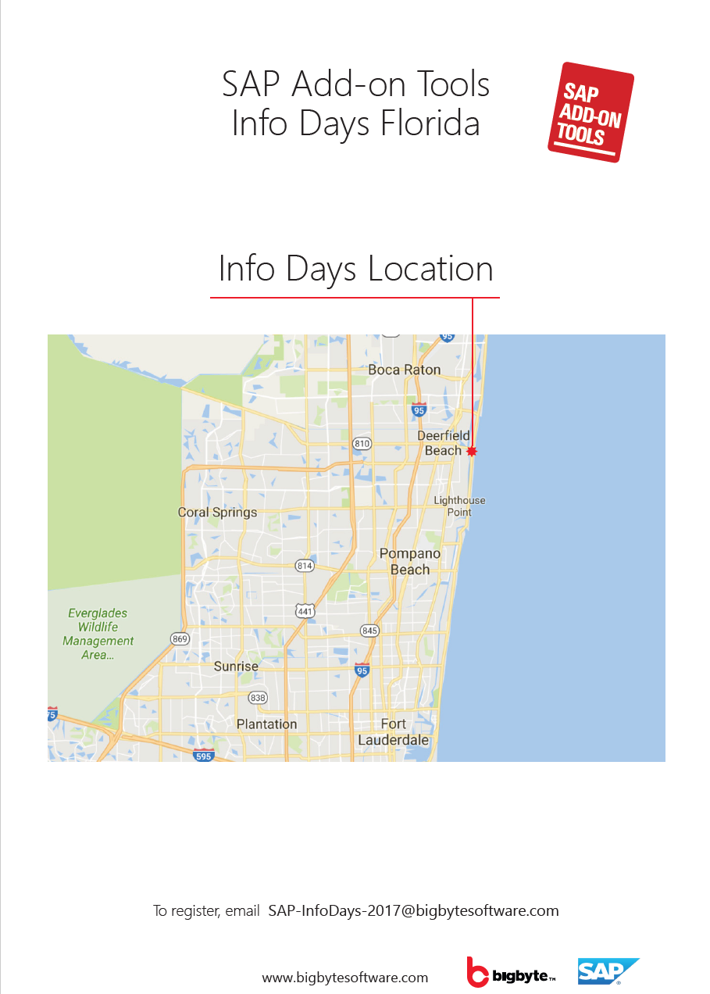 Systems Thinking for the supply chain

Thinking in Systems is a concept that has beenaround for many years. Names like Jay Forrester, Donella Meadows, John Sterman and Daniel H. Kim are coming to mind when you're thinking in systems.  If you want to know more about this very interesting approach to problem solving in your every day life or the supply chain in particular, google those names or read their books. You'll find a wealth of information and maybe a new obsession to effectively solve problems... not only in your supply chain.

In fact we are dealing with systems all the time, whether you're aware of it or not. Your family is a system, the toaster in your kitchen, a football team or ... Anything that has interaction going on and can be described by interrelated and interdependent components (which by itself might represent yet its own system) is a system. And a system differentiates itself from a collection by these relationships and interactions. A database of parts and product information is a collection but as soon as you start buying these parts to consume them or put them into inventory you are operating within a system.

If we are now starting to think in systems we look not only at the parts in a collection but at its 'whole' and its relationships and dynamics. Traditionally, most of us take an analytic, reductionist view on our problems. We take things apart to investigate sources and outcomes. In systems thinking you put things together, look at behavior over time and, maybe most importantly, consider delays and their effects (which we mostly disregard in the analytical view). 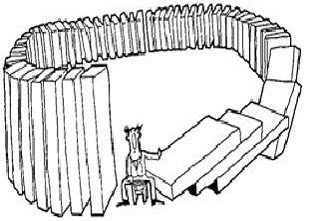 Delays is what confuses us when we try to do the best we can but don't understand what's going on or why it's going on. As perfectly described by the beer game (which teaches students what happens if you have demand variations in a supply chain), if you ignore delays you will end up with inexplicable outcomes that are counter to your intentions. The beer game's major insight is that when customers start purchasing a little more or a little less than before, the delay that occurs between ordering from the supplier until they deliver the goods will then causes wide swings in inventory holdings. You first end up with too much and then too little and then too much again. What is even worse is that if you have an interconnected system of 'consumer - retailer - distributor - manufacturer' over multiple levels, the demand swings are exponentially propagated throughout the chain and looks like a bullwhip as the swings get bigger and bigger towards the manufacturer who ends up with total chaos.

As you probably know this is the Forrester Effect, or otherwise known as the Bullwhip Effect.

An analytical, reductionist approach to solving this problem makes it very hard to see what went wrong. If you look separately at the retailer, distributor, manufacturer you won't see the dynamics between them. What ends up happening is the blame game when, in fact, it is no ones fault that the distributor sits on large inventories at one time and has back orders at other times. The problem lies in the dynamic of the system structure with its delay between orders and deliveries. But this cannot be understood if you look at just one part of the system and forget its interactions with other parts. In many cases one doesn't even look at the distributor as a whole but only at its parts (sales department, purchasing department, materials planning).

When you start thinking in systems you may use tools like causal loop diagrams, stocks and flows and value chain mapping to visualize structures, dynamics and eventually get to the core of the problem. Systems Thinking also provides you with archetypes - templates of repeating structures and behaviors - that you might use in supply chain management. 'Shifting The Burden" is one such archetype. In this type of a situation the problem symptom is not addressed by the long term solution but with a quick fix. The quick fix solves the problem for now but has negative consequences in the long run.

In our example we have part shortages in front of the assembly line. The problem is solved with 'heroic' expediting efforts described by balancing loop B1. 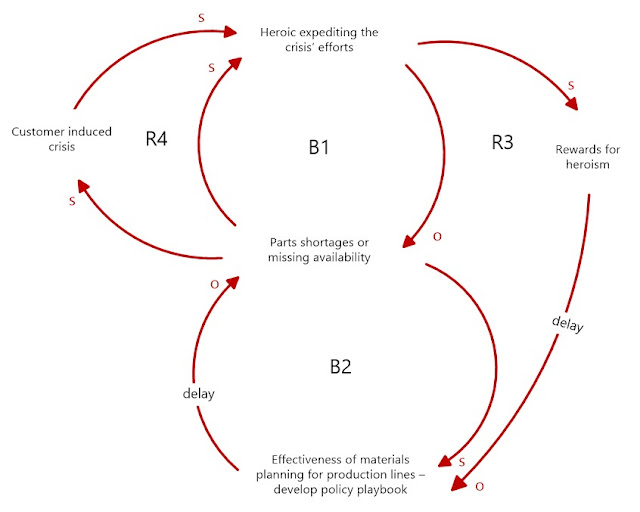 The shortage goes away - for now. In the long term though, the problem is not solved. A sustainable solution would be to improve the effectiveness of materials planning through the use of standard and proven replenishment policies after portfolio segmentation. Because the burden is shifted to expediting, there is an unintended side effect: our heroes feel good and get a pad on the shoulder every time they 'quick fix' the problem. This does not fix the problem at hand but increases the need to expediting further. Additionally, because delivery delays to the customers occur more frequently, the customers compete with each other to grab demanded product not sufficiently available and induce even more crisis on the production lines.

Thinking in systems allows you to see the dynamics resulting from quick fixes,  from not using the effective fix, delays and subconscious actions committed by players who aren't aware that they cause problems. There is a wide variety of archetypes which were developed over the years. If you're in the business of optimizing supply chain dynamics and producing better results it may make sense to dive a little deeper into the world of Systems Thinking.