Why do you sacrifice yourself to save the safety stock? 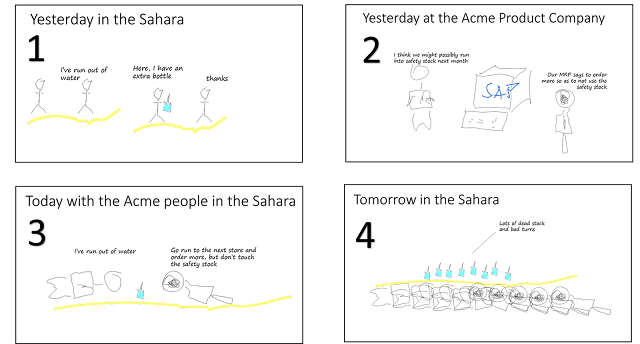 Here is something I never understood: why do so many people plan without the safety stock? and why is the safety stock taken out of the planning situation (at least in the standard configuration in SAP-ERP) I know... everybody claims to use it when its needed but until then you have introduced a kazillion rescheduling messages, new order proposals and canceled purchase orders.

In my illustration above the consumption of the water should happen at the same time the demand stands and therefore Jenny would certainly take a sip, however, if Jenny would have applied the same planning principles as in the Acme company, and she would spend a certain amount of days in the Sahara Desert, she'd run into a few problems. Let's say she plans to be there for 5 days and calculates with a bottle per day. Using a reserve of 1 bottle she'd planned for 6 bottles for the trip. Also assume that she can order more bottles (minimum a six pack) from a kiosk in Aoulef, Algeria. But it would take three days until the water arrives.

Now, on the first day in the desert, the trip gets extended by one day because they missed a dune. Ignoring the safety stock, Jenny would place an order for six bottles and end up with 8 bottles on day 4 with 2 to go.

On the other hand, if the trip gets extended (again by one day) on day 4 (from 5 days to 6 days), she'd again place an order but this time the six pack would arrive too late and is not necessary either.

This illustrates the two problems of introducing unnecessary noise (the second situation) and surplus inventory (the first situation) that we will get when the safety stock does not act like a buffer. In fact, you'll end up with an unmanageable amount of exceptions and a lot of dead stock (unused, surplus inventory).
Posted by Uwe J. Goehring at 8:44 AM No comments: