Most organizations consider the planning of their sellable products and materials an important part of their business strategy, but the way it's being executed makes one feel that the outcome is rather coincidental or random.

If you, as a planner, have to resort to massive expediting, fire-fighting and constant responding to rush requests from sales and / or production, then chances are you're operating within such a chaotic, lawless, rogue system. Should you use SAP software to manage inventory and replenishment, you typically work with Excel spreadsheets, your most used transaction - by far - is MD04, almost all your finished products and raw materials are setup with MRP type PD and your entire day is filled with correcting orders, chasing POs and taking in angry emails from people who want stuff.
Most planners, buyers, MRP controllers I work with, believe that this is the way it has to be... one has accepted their fate and does their best to keep the situation at barely the minimum it needs to run, so as to not completely break down.

Oddly enough, management usually doesn't do much about it. This situation is considered normal and people think there's not much they can do. "We bought SAP to automate planning, IT implemented it, so what else can we do?" I hear a lot. Yes, SAP has been implemented. so much is true. But nothing else has happened. And by now, so many years into implementing SAP, we should know that implementing the software is only part of the endeavor. What's by far more important is that we're in this to improve processes and operations... better inventory levels, higher service or fill rates, more automation, less noise. However, and please tell me if I am wrong, those things are often forgotten and after the implementation we're operating the same way as before... only with SAP now.

So what can be done? Well, the best way to get out of a random system is to proactively laying down some rules which generate predictable outcomes. Like any administration is driven by policies and rules, your planning department should also be guided by principles, policies and rules. For example, a football coach publishes a playbook by which everybody knows what to do in a given situation so that the outcome is more predictable and less random. Much in the same way it should be clear that when a product has a long replenishment lead time, sells in high volumes and very predictably, one should hold some inventory so that the customer does not have to wait when they place an order.

Building this kind of rule based material and product planning into SAP can be done using the SAP Add-On Tool „MRP Monitor“. The tool is developed in the SAP namespace by SAP and supported by SAP. It’s an extension of ECC 6.0 and also runs in S/4 HANA.

The MRP Monitor provides a number of functions: it can analyze and organize all of a plant‘s materials (I ran it for an excess of 100,000 materials at a time). While it does that, it can also perform a segmentation into up to 9 segments (ABC, XYZ, EFG, PQR etc.). The classes each material is assigned to, is then temporarily saved in a new material master screen that comes with the monitor.
Then there is the rule (or policy) table (also included in the package). In it you save the rules, the master record setups to support the rule and the logic from the decision tree.

Now the system takes over. You’ve done the part the human must do (until AI comes around) defining the rules and publishing it to the system. From then on the system will keep the data par to the rules you defined. This happens automatically (or step by step if you feel like you have to watch it initially) and regularly. 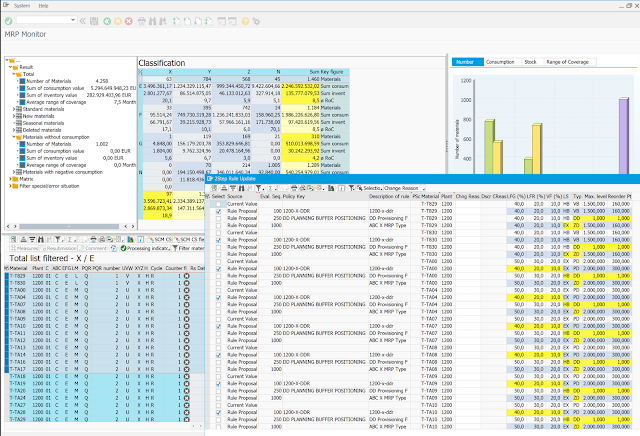 Gone are the days when every planner had to decide on their own how to set the basic data, how or if to accumulate inventory and when to order how much for the replenishment.
No one knows what exactly will happen in the future, but organizing yourself into rule-based planning will give you a much better chance to predict and control desired outcomes.