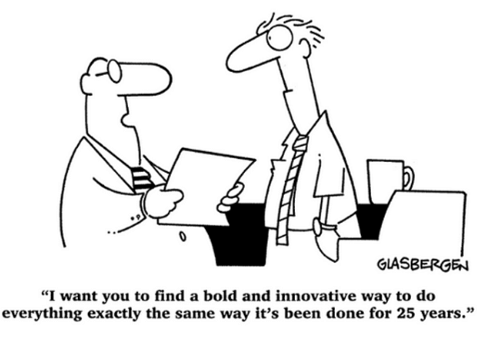 Do you know the story of the company who decided to acquire and implement an ERP system? It was sometime between 1990 and 2020 that their leadership wanted to modernize their process landscape and participate in the global quest for digitalization. A task force was put together and Requests for Quotation were sent to various System Integrators. Then, in elaborate meetings, the consultants demonstrated their experience and capabilities with the functionality and intricacies that an ERP implementation required.

Shortly thereafter, the best presenter was selected, and an implementation project put together, consisting of experienced consultants and super users from the client. Interviews were performed and the current processes and activities were captured, documented and translated into the new system. As the company wanted to implement in multiple manufacturing sites and distribution centers around the world, a template was defined for a speedy roll-out. That template included configuration settings, master data specifications and a lot more that made it easy for IT to plug the new system into any of the sites out there.

So far so good. “We’re getting a new system which is integrated, modern, sophisticated and will catapult us into the elite club of digitalized companies out there”, was the initial consent between business leadership and IT.

Fast forward to 5 to 15 years after Go-Live:
·       The company’s IT still runs the ERP system.
·       Planning, Scheduling and Monitoring of Production is executed in an abundance of very sophisticated spreadsheets
·       Planning and replenishment of inventories for purchased parts in the plant and finished goods in the DC is done through constant expediting and rescheduling of orders, because the ERP is incapacitated by thousands of daily exception messages and an abundance of noise and the constant beating by the bullwhip effect.
·       Every now and then another plant or distribution center is implementing the template
·       A new culture has developed: suddenly, there are “gurus” running the show. The gurus have figured out how that new system works from the underbelly. They fix every problem and become the heroes of the moment. No problem is big enough for them to not have a work-around, another spreadsheet or a third-party solution as a quick fix. Nobody dares to question them, and they are indispensable to the business.
·       Business runs as usual. It’s not worse and not better than before the implementation of the ERP system. They still have inventory problems, stock-outs and mediocre fill rates or service levels. But they have the gurus now. And the gurus fix what needs to be fixed.
·       What’s really worrisome is the sheer number of manual interventions necessary to fulfill customer demand on time and on quantity, when so much money was spent on the ERP with the expectation of automation and visibility.

On the company went and intended to implement the ERP system in another location. However, that location was threatened by global supply chain problems and other economic forces. Therefore, this time, leadership of the company expected some value coming out of the implementation. That was new and unexpected. IT had already engaged with a consultancy and the template was already groomed and ready for roll-out. Interviews with stakeholders had already been performed and it was clearly defined how the old processes (the ones that produced bad results) were perfectly copied and orchestrated into the ERP system (which was now mainly driven by spreadsheets).

This was a problematic situation. People on all levels were confused. “Wasn’t this ERP system supposed to deliver value in the first place?” “We implemented so many plants before. Why should we do it differently now? It was working before. Wasn’t it? And if it wasn’t working before, why didn’t we do anything about it?”

The most telling question, however, was the following: “We didn’t know that a roll-out of the ERP should actually deliver value and better results. We have always implemented to get the system up and running. And that was always our measure of success.”

I am sure there are many companies out there who do much better, but for those who can see themselves in a similar place, I’d like to provide some suggestions based on our experiences and the methodologies we have developed over the years.

This series of blogs contains 5 parts. The first one is the problem statement you just read. Next, I’ll go into how we perform assessments and analyze a current situation. Part 3 is all about logic trees and how systems thinking can help turning undesired effects into desired effects. Then, in part 4 we discuss our SAP value stream mapping and how it can help with the realization of value. Finally, in part 5 we attempt to put the pieces together to show how you may achieve considerable change and significant value in a sustainable manner.

Getting Value and Results out of an ERP 2

Getting Value and Results out of an ERP 3

Getting Value and Results out of an ERP 4

Getting Value and Results out of an ERP 5